The MiR250 Hook is a collaborative robotic arm that's used as a top module on the MiR250. It's ideal for a variety of towing tasks and can efficiently move heavy objects between different locations in a production facility or warehouse. 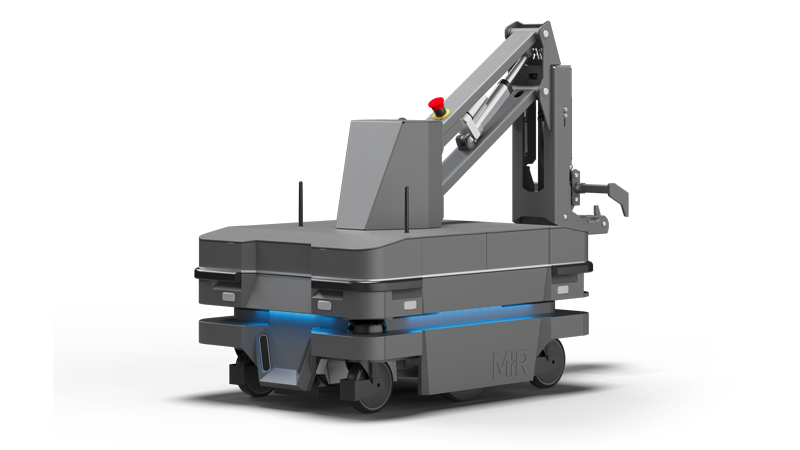 The MiR250 hook supports the transport of loads up to 500 kg and offers new possibilities to effectively move heavy or unwieldy cargos in your production facility or warehouse. The combination of the MiR250 and the MiR250 Hook is ideal for towing tasks of various kinds. With the MiR250 Hook, you can move heavy items from one location to another in your warehouse or move linen and food carts in hospitals, ensuring efficiency and saving time for higher-value activities.

The MiR250 Hook can autonomously transport the carts you define, as it identifies them by AprilTags. The ability to integrate the MiR250 Hook into a fleet of mobile industrial robots means it can be easily repositioned as requirements change. By automating the transport tasks in your production facility or warehouse, you save valuable time that can be used for other, more important tasks, ensuring the most efficient setup.

The use of the latest software ensures the optimal performance of the MiR250 Hook. With improved software and a stronger robot base, the MiR250 Hook offers a high level of agility, making it an optimized mobile industrial robot solution when it comes to productivity, precision, and performance.

MiR Hook 250 is a user-friendly and efficient mobile robot top module for fully automated pick-up and towing of carts in your production facility or warehouse. Learn more about the MiR250 Hook.

The MiR250 Hook autonomously tows and transports heavy loads between locations in your warehouse or production facility. You can define customized routes depending on your needs, controlling it from a computer, tablet or smartphone. The MiR250 Hook identifies the carts with April Tags and can be incorporated into a group of mobile industrial robots. You can simply measure your cart and feed the data into the software of the MiR250 Hook solution. Book a demo to see how it works.

The MiR250 Hook can help you get more effective operations in your facility. The automation of the transport task of weighty or unwieldy loads between locations, can save you time to do activities that add higher value to your business. Contact us to learn more.

The MiR250 Hook can tow and transport loads up to 500 kg. Book a demo to see how it works.

What you need is timely transport tasks, that you would like to avoid, thus using your time on more value-adding activities. Logistically, you don’t need to alter much, as the built-in sensors, cameras and sophisticated software secures that the MiR250 Hook and a cart will maneuver safely around people and obstacles. Contact us to learn more.

Other Mobile Industrial Robots to Match Your Needs

The MiR100 is a safe, cost-effective mobile robot that quickly automates your internal transportation. The robot optimizes workflows, freeing staff resources so you can increase productivity and reduce costs.

The MiR250 is a more flexible AMR that can work around the clock and is simple to set up, for improved productivity. Its smaller footprint and increased adaptability optimize internal logistics without changing layout.

The MiR600 is designed to automate the transportation of pallets and other heavy loads across industries. With a total payload of 600 kg and a footprint of 1350x920 mm, MiR600 is a large, powerful autonomous mobile robot.

The MiR1350 automates and optimizes the internal transportation of heavy cargo and pallets. It is the most powerful robot from MiR, that can transport heavy loads even in highly dynamic environments.

Get Started With Tasklet Robots

Transform how you handle internal transportation processes with Tasklet Robots and help your warehouse workers focus on value-adding tasks.

Contact Us Book a Demo
No Results Found
This page is not available in the selected language. You have been redirected